Over the last fourteen days, I’ve had a complete crisis of faith.  How did this happen?  Why did this happen?  How does it happen to such an incredible person, a child?  There are times in my life when I thought I’d been low, but this has shown me that there is, indeed, a sort of hell on Earth.

Lately, Ky waxes quite philosophic – not shocking if you know him – but even more profound than I ever recall him being.  He kicks it into high gear most especially between the hours of 11 p.m. and 12 a.m.  The timing is interesting because it’s often after he’s gotten incredibly sick from his 4 p.m. chemo treatment.  I am reduced to a quiet wreck outside his door, while he emerges, somehow, braver than he went in.

Last night Ky was super sick.  He’d just downed at least five pickles (one of the only things chemo hasn’t changed the taste of for him).  He came out of the bathroom and I crawled into his bed with him, just the two of us in the dark.  He asked why I always called him an old soul.  He said he, too, thought he’d lived a few lives and assured me that there were more laid out for him.  I told him not to rush ahead, he had a lot still to do here, now.  He agreed.  Then, in a way that makes me feel like maybe, just maybe, a diety of some sort was speaking through him, he said “It’s not really the things you do, it’s the impact you make on the world, Mama.”  And just like that, we realized we could make amazing shadow puppets on his wall.  It was, for me, the perfect juxtaposition of his life so far – wisdom beyond his years and a sweet childlike nature that comes from every pore.  We giggled as my creature chased his around the room.  For a moment, there wasn’t a central line, impending chemo, or a battle – there was just a boy and his mama.

At 4:15 a.m., his last bag of chemo was hung for this round of treatment.  A milestone for a boy, his mama, his papa and his sister…and all the people he’s already impacted in this world.  I don’t know if I can believe in a higher power right now, but I believe so fiercely in my son.   #beautifulthingshappen 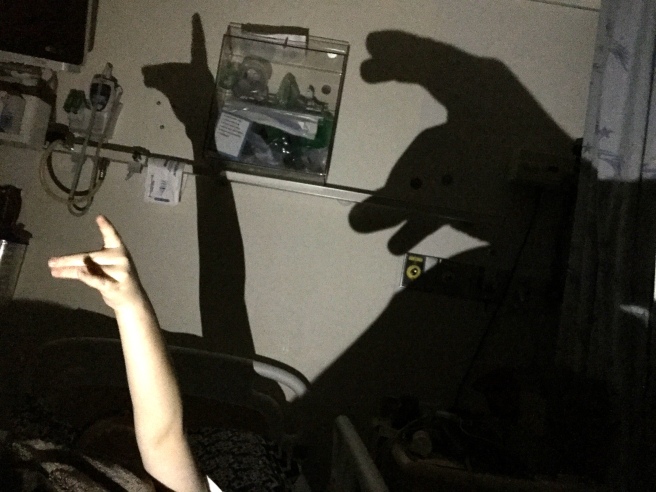 I’ve told myself a lot in the last couple of years that it, rather I, will always be okay.  But then I took my Cappy to the emergency room the other night.  He’d been vomiting…for weeks.  Not consistently, but regularly enough.  In early March, I looked at him in the middle of Church Street in my beloved Burlington, Vermont and knew, and said aloud, “There’s something wrong.”.  It was Saturday.  I called the doctor as soon as they opened on Monday.  Thankfully, she listened.  Given what we were working with,  it looked like a concussion.  We went to PT, modified school days, and took acid reducers for his upset stomach.  To no end.  So, when I picked him up from school last week and he looked like a fresh slice of hell – pale, ‘wobbly’ in his words, and vomiting – we struck out for Maine Med.  We were told that we wouldn’t find the cause of his vomiting that night, but they also drew labs.  A low white cell count and anemia were regarded as incidental findings, to be followed up on by our primary care doctor.  That visit generated a referral to a hematologist/oncologist.  The visit to the gastroenterologist generated nothing…other than there’s no apparent gastrointestinal cause for the anemia.  Which, in all reality, might be just about everything.

We left that office and I made a call to our primary care doctor’s office.  They gave me the name of the doctor Cappy had been referred to for his anemia.  I called.  “Maine Children’s Cancer Center.  How may I direct your call?”.

A mama on the brink of desperate is an interesting animal.  God bless the poor woman who took my call.  I explained, as best I could, what was going on and asked that someone please try to see us.  “Something is wrong…” was all I kept repeating, “He needs to be seen.  Please.  I need him to be seen.”  She assured me that a nurse would call either that afternoon or first thing the next morning.  Cappy rolled over as soon as I hung up.  He’d been sleeping in the passenger’s seat of my Jeep.  “Savage Mama…”.  And just like that, he was back asleep.  I blinked tears and looked over at my guy, pale as anyone I’ve ever met, giant ears, piles and piles of dark hair and eyelashes that made him seem even more pale.  Savage Mama – for you, my sweet boy – always for you.

(Ten minutes after I finished this post, our family doctor arrived at my work to personally tell me the news about Ky.  Not something you hear about much these days, but – she’s incredible.  She, along with a dear friend and colleague held me as I went to the ground, sobbing.  I was given a mission – pack a bag and get Ky to the hospital immediately – and, after one more conversation convincing me that not only could I do that, I *needed* to do that, I dismissed Ky from school and we drove to Maine Medical Center, where he’s remained since.)