I got out of bed
on two strong legs.
It might have been
otherwise. I ate
cereal, sweet
milk, ripe, flawless
peach. It might
have been otherwise.
I took the dog uphill
to the birch wood.
All morning I did
the work I love. 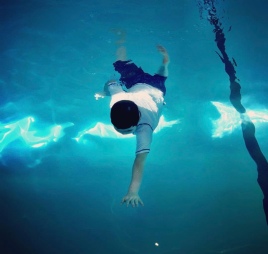 Four years and a day since Ky pointed the hard question cannon directly at me and said “How will I get thru this?”  I gave him the first collection of words my brain and mouth could collect into a semi-sentence:  one thing, one day at a time.

Beginning May 18th, my social media becomes an alley of anniversaries.  It’s an alternately well-lit and completely dark alley; there are things I remember so well that they might as well have been moments ago, while there are other things I remember only because my words or a photo tell me that it happened.  Memory is funny like that, and, funnier still, is that the edges of Anniversary Alley feel sharper some years than they do others.

I realize that there is luxury in memory.  I don’t have to live in fear that I’m going to open something and find a memory that I can’t escape from by hugging him.  Ky is here.  I can put my arm out and be sure of him.  Tonight as I write, I’m wearing a flannel of his that is huge on me, but won’t fit him for much longer.  He’s growing.  For others whose own footsteps wore a similar path along the hallways of Maine Medical Center and Boston Children’s Hospital, this is not the case. Tonight I’ll tell him good night and I love him and he’ll respond that he loves me too; Jane Kenyon reminds me it could have been otherwise.

One thought on “Otherwise”